What Do Catholics Believe? 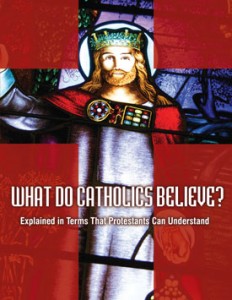 Drawing from many Catholic sources, this booklet contains in a simple and understandable way the truths of the Catholic Church. Used as an introduction to help both Catholics and Protestants understand what Catholics believe and teach. An excellent supplement to the R.C.I.A. program.

The Riches and Blessings of
The Mass 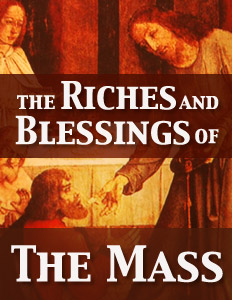 The Eucharist is not a spectator activity. Everyone participates in the ritual, the whole community celebrates; in a very real sense the entire congregation “says Mass.” Catholics understand participation in the Eucharist primarily as the ultimate sign of the unity that exists among Christians. Because the Eucharist or the Lord’s Supper makes present the central mystery of the Christian faith – the suffering, death, and resurrection of the Lord Jesus – Catholics consider it the highest form of Christian worship. In this study guide we will examine the Mass from A to Z.

The Mass of All Ages 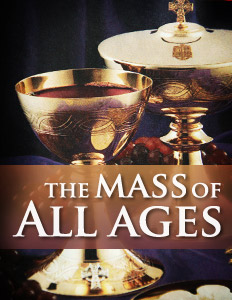 For almost 1900 years the same Mass has been given.  Finding its roots in the Old Testament Passover supper (meal), Jesus is saying in essence to His disciples, I am the Lamb, this is My blood, that causes the death angel to Passover you.  Includes study questions and answer key. 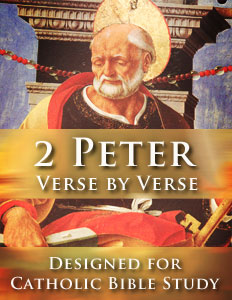 The Second Vatican Council urged the church to make every means available for God’s people to read, study, and pray the Scriptures. It insisted that “access to sacred Scripture ought to be open wide to the Christian faithful (Dogmatic Constitution on Divine Revelation, 22). This has resulted in more Bible-rich preaching and catechesis, as well as a surge of Bible Studies. Go with the Apostle Peter as he teaches the faithful verse by verse the Second letter of Peter. Featuring: Analysis of the book, Multiple Catholic translation insights, Catholic Commentary, Scripture cross references & Catechism, along with discipleship questions and answers.

Featuring Catechism of the Catholic Church 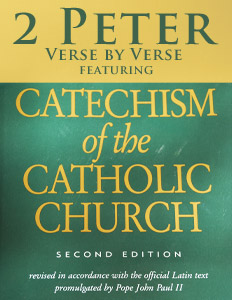 Go with the Apostle Peter verse by verse as he teaches the Church. Catechism insights supplied for each verse from the official Catechism of the Catholic Church. 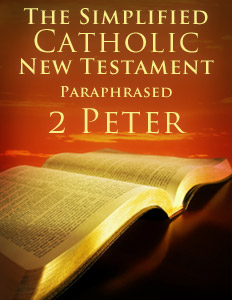 As a Jewish teacher, Jesus was absorbed in sacred reading of the Scriptures. We see in his reading of the scroll in the synagogue at Nazareth that he had prayerfully reflected often on the text (Lk. 4:16-21). From the time of his ministry in Galilee until his death in Jerusalem, Jesus’ reading of the sacred Scriptures matured his self-understanding. This method of prayerful meditation is the type of sacred reading he taught his disciples. Once again, the whole people of God are recognizing the spiritual power achieved through experiencing God’s presence in the inspired Scriptures. Enjoy reading and listening to God’s voice in the sacred text of 2 Peter.

The First Letter of John 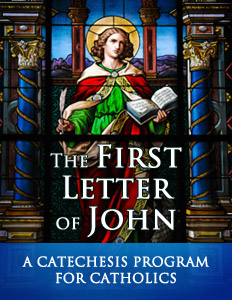 A simple, easy, understandable Catechesis program on the First Letter of John. Based on the Catholic Douay-Rheims Version Latin text with a Greek text explanation. Featuring also an easy to understand paraphrase with study questions for each verse. An in-depth study, yet simple an accurate. Each verse is examined and brought light upon.

The First Epistle of St. Peter the Apostle 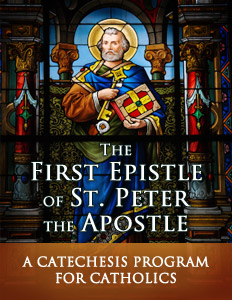 A simple, easy, understandable Catechesis program on the First Letter of Peter. Based on the Catholic Douay-Rheims Version Latin text. Featuring also an easy to understand paraphrase with study questions. Simple an accurate, each verse is examined and brought light upon. May be copied and used for Bible study and Catholic catechesis.

Repentance, Penance, and the Forgiveness of Sins 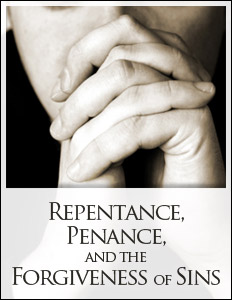 Catholic translations of the Bible have often used the words "repentance" and "penance" interchangeably. Is there any difference of meaning? What are the acts of the penitent? Which sins must be confessed? What does the Bible say about "repentance?" Study questions and much more. 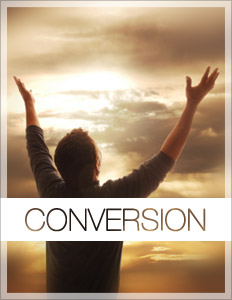 "Conversion" is a turning to God that must continue throughout life. What are the warnings of the New Testament? Study questions from the Bible and much more.

Insights Into The Kingdom of God 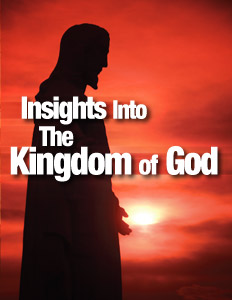 According to Vatican II, the Church “receives the mission of proclaiming and establishing among all peoples the kingdom of Christ and of God.” What is the Kingdom of God?  Includes study questions and answers. 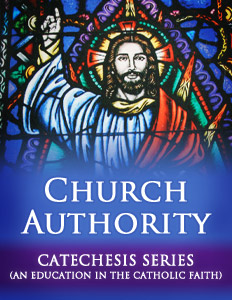 Biblical scholars tell us that the last book of the New Testament was not written until the end of the 1st century A.D., that is, until around the year 100 A.D. This fact would leave roughly a 65-year gap between our Lord’s Ascension into Heaven and the completion of the Bible as we know it. Therefore, "Who or what served as the final, infallible authority during that time?" 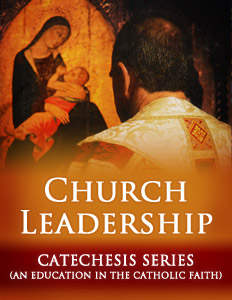 The apostles appointed other men to carry on their ministry and mission. Through prayer and the "laying on of hands," the apostles called upon the Lord to give these new leaders the same authority to teach and lead the Church that they had received from Jesus himself. The early Christians believed that the new leaders had indeed received this authority from God.

The Sacrament of Baptism 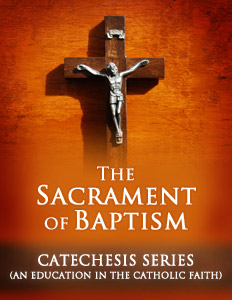 Who is eligible for baptism? The first converts to Christianity were adults. The New Testament also speaks of the baptism of "whole households" (See 1 Cor. 1:16; Acts 16:15; Acts 16:31, 33), which in the normal Greek usage would include children.

The Sacrament of Confirmation 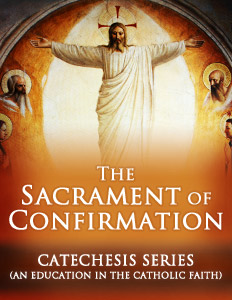 Confirmation is the official prayer of the Church for the full outpouring of the Holy Spirit in the life of a baptized Christian.

Common Prayers of the
Catholic Church 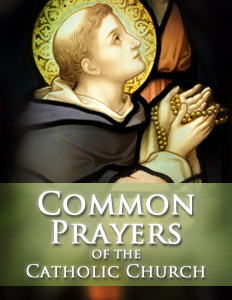 "Common Prayers of the Catholic Church," "How to Go To Confession" plus "Prayers of Contrition From the Bible."

Let’s Make It Simple! The
Goal of all Catholic Teaching is Love 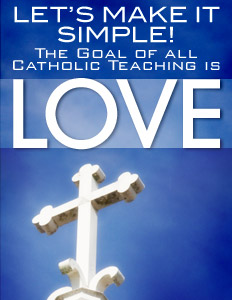 The Catechism of the Catholic Church, states, "The whole concern of doctrine and its teaching must be directed to the love that never ends. Whether something is proposed for belief, for hope or for action, the love of our Lord must always be made accessible, so that anyone can see that all the works of perfect Christian virtue spring from love and have no other objective than to arrive at love." (Roman Catechism, Preface, 10). Learn what love consists of from 1 Corinthians 13. Study questions for group discussion.

The Parable of the
Rich Man and Lazarus 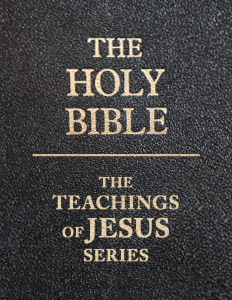 Jesus gives us instruction about life beyond the grave. How important are the decisions we make on earth? Do we remember our life on earth? After death are we concerned for others who have not yet died? Jesus gives insight into these questions and others. Study questions for group discussion and Bible study.

The Parable of the Pharisee
and the Tax Collector

Jesus speaks of two kinds of people. Those who are right with God and those who are not. The humble will receive grace, the proud will not. What can we do in our situation? Jesus has the answer. Study questions for group discussion and Bible study.

What Does the Church and the Bible say About Caring for the Poor? 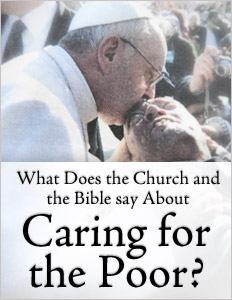 Insights from Catholic Dictionary, and Catechism of the Catholic Church, along with sacred Scripture, we examine teaching concerning God’s view of the poor. Study questions follow for Catechesis and Bible study. May be copied and used for private or public Bible study.